APENFT, the premier foundation and fund for the collection of top-tier NFTs, has announced that it had received the punk avatar (No. 1649) donated by an anonymous early user of CryptoPunks. According to recent trading data, the highest bid for CryptoPunk1649 was up to $165,827.

Although this donor prefers to remain anonymous, the address of the previous owner of CryptoPunk1649 was 0xbb511a on arvalabs.com, the official website of CryptoPunks, from which we can tell that the donor must have owned this avatar in the early stage of the project. CryptoPunk1649 was not for sale before being donated to APENFT,

CryptoPunks is a project running on Ethereum and consists of 10000 unique avatars. Each avatar is a photo of 24×24 pixels generated through algorithms. Most of them feature punk men and women, with a few featuring rare apes and aliens. 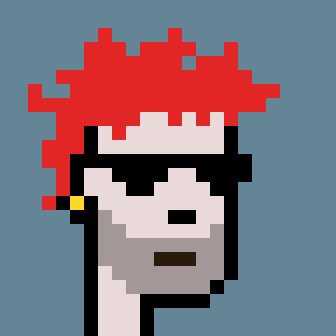 As of now, the sales volume of CryptoPunks has topped $900 million, with the highest price at which a single avatar sold reaching $7.58 million.

CryptoPunks is considered to be a great stimulus to the CryptoArt movement. It’s one of the most representative NFT projects and has inspired various digital artworks and collectibles. Many similar projects have also since emerged on the market.

The receipt of CryptoPunk1649 marks that APENFT has added to the variety of its collectibles. On August 22, Justin Sun, founder of TRON, donated “ROCK ID 87”, which he previously purchased, to APENFT. “ROCK ID 87” belongs to the EtherRock series and is one of the 100 NFT images of rocks minted on Ethereum.

The official website of APENFT shows that apart from NFT avatars and NFT images of rocks, its collectibles also cover NFT works created by Beeple and Pak, two renowned crypto artists. In addition, celebrated works of household names such as ‘Femme nue couchée au collier’ by Picasso and ‘Three Self Portraits’ by Andy Warhol are part of the collection. Underpinned by the underlying technology of top-notch blockchains Ethereum and TRON with support from the world’s largest distributed storage system BitTorrent, APENFT has registered world-class artworks as NFTs, introducing conventional artists to the world of blockchain. Now, APENFT has a collection worth over $30,902,826.

Officially registered in Singapore on March 29, 2021, APENFT is backed by the underlying technology of the Ethereum and TRON blockchains with support from the world’s largest distributed storage system BitTorrent File System (BTFS), to deliver the mission of registering world-class artworks as NFTs on the blockchain. NFT, as the sole token issued by APENFT, is a decentralized digital currency developed in compliance with the ERC-20/TRC-20 protocol and serves as a proof of stake of the foundation. NFT holders can vote, share profits and participate in community events